QBs:
Roethlisberger ($33) -- Arguable #1 projectable QB this week is a bargain.

RB:
David Johnson ($10) -- Most obvious call. See #1 above. Projects as top 10 RB for the minimum, so you're pocketing the difference between him and, say, Gurley ($29). Spend that money on elite WRs.

TE:
S. Chandler ($10) -- Discounted volume. Only had part of a game to establish himself as a target hog so that's a small question mark but really, should get target volume.

B. Watson ($18) -- See #2 above. Snead's injury came up during the week. Those targets will go somewhere and B. Cooks has a terrible matchup. Assuming the price was fairly accurate when it was set, the expected target increase makes him projectably better than this price. 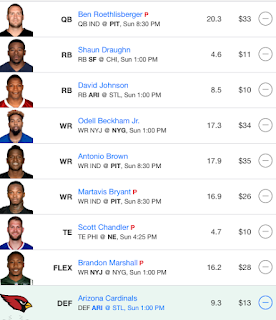