not praying for Paris 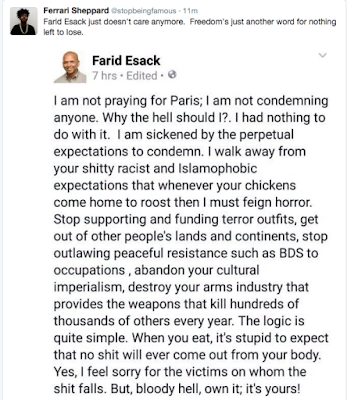 I really like this comment. However, I wish he would have stopped the fifth sentence at "expectations." The continuation with "chickens come home to roost" angle falls into the same utterly useless binary of if A then B. Human agents are not a clean system of binary inputs and outputs.

Fundamentally, my issue boils down to the fact that attributing this attack to a nebulous conception of Western imperialism is both true and unhelpful. There is no simple answer to "what to do about imperialism." It is not an if/then statement. Of course we can agree it should end but that is largely a non-starter.

I prefer to simply look at the scale of the organization itself and see the specific role that Western powers played in the creation of this movement. This is a concrete example of the ideal repercussions of imperialism that Esack was referring. Let's also not forget that there is just as much racism and degradation happening at the local level that is contextual to the Paris experience.

I guess I have just as much of a problem with this line of thinking as I do with the new atheist line of thinking that religion is a bunch of sky-worshiping idiots and that all irrationality comes from this belief. I mean, sure you can say that, but your full of shit and it doesn't mean anything until you look at the specific claim being made.

Shit, I don't know if any of that made sense.

Seems you're disagreeing with some aspect of western imperialism --> specific non-state terror attacks. I don't see a problem there but feel free to explain.

As I see it, a good Left critique of imperialism doesn't use that term as an -ism in the way new atheists use religions. When NAs talk about Islam their claims turn on the contents of consciousness, the invisible-to-the-outside-and-barely-understood-from-the-inside products of metacognition. Imperialism refers to quanitifiable (high resolution, concrete) events. We can speculate about imperialists' consciousnesses, but that comes after the facts are understood and they're relatively unimportant. Good analysis of imperialism treats the actors as objects and deals with brains, not minds.

There's also a gap between data and anecdote (maybe you have this in mind). Usually the problem is people trying to blend anecdotes together and turn them into data. Here we have the reverse: how to get from imperialism (state terrorism) causes non-state terrorism in general (in the data) to this individual case. Not a methodological problem, or to the extent it is, it's a problem for science generally.

Maybe it's jumping the gun here to say imperialism caused the Paris attacks with so many unknown details but ISIS doesn't exist without imperialism so it seems like a pretty safe call. Again, I don't mean a theory about imperialism, I mean bombs and brains processing bombs and such. Alternate universe where U.S. stays home, surely other shitty things happen in the Middle East. That's a tough question but I never see people bring it up.

As for that sentence you pointed to, I didn't notice before but now I do: there's a just-world fallacy in there, the notion that blowback is "deserved." A bit shaky.

Yes, the just-world fallacy is at the heart of my issue here. Good liberals have to play the devil's advocate and usually that is as simple as throwing the word imperialism into the conversation flow.

As to the issue regarding NA's, I don't find the consciousness angle convincing. NA's often point to specific items in the Koran/Bible etc. as an input with a given (read: flavor-of-the-month outrage/terror act) output. I mean, there is a religion=violence meta-narative, but the NA's are all too happy to provide concrete examples.

I definitely agree that a good critique avoids the -ism of imperialism. However, I do see liberals falling into the trap when speaking about actions having "consequences." This is where Aslan's counter-argument comes into play. At what point is an individual's actions in (alleged) retaliation of a perceived wrong representative of that person's culture?; society?; religion?; tribe? I mean shit, could it possibly be that people just react differently to being constantly shit upon?

Data and anecdote is indeed an underlying issue here. The existence of ISIS absolutely owes its existence to imperialism but again, its a non-starter. ISIS has a beginning as a resistance group to undermine the largely secular Sadam regime heavily financed by our Middle East partners (Qatar, UAE and Saudi Arabia) and supplied by US hardware. Is it any wonder why the stated goal of ISIS is to combat largely secular oppressive and corrupt regimes like Syria and Iraq yet completely ignore our partners (that also happen Islamic but are the MOST corrupt and oppressive)?

This is no doubt a subject with heavy imperialist overtones. But there is also an entire solar-system-level conversation regarding the ubiquitously horrible "US interests", our foreign policy of the last 60+ years (as far back as the CIA orchestrated Iranian coup) and the very notion of allies in the region. We don't support the good guys because they don't make us money. There is a reason there is no secular resistant groups that we support in anything other than mild verbal 'atta boys.' Just look at the extreme milquetoast support of Tahrir Square until we saw the opportunity to install the military.

I mean, sure, lets say "hey, we should stop being imperialist assholes" but it just leads to the same reactionary outrage to not showing proper sympathy that misses the larger point.