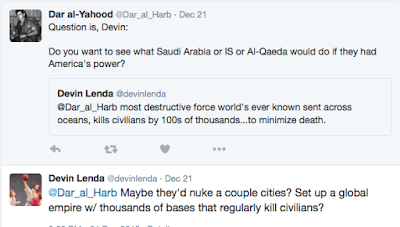 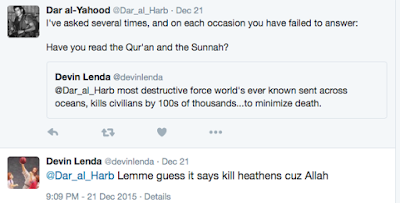 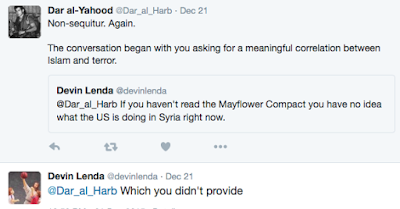 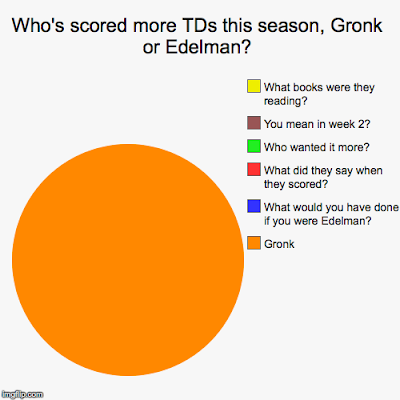 What I truly love about your challenge is the fact that correlation is only the first step. These asshats would then have to prove causation.

Lets say they were successful. Group "G" (keep in mind group "G" is a subgroup of the whole; those from mid to lower level developing nations in which poverty and subjugation are maintained by a military occupation and global financial terrorism due to rich natural resources) shows a positive correlation to violence while at the same time being the most isolated and focused upon group for state sanctioned violence and terrorism globally. It has to be because of their ancient and flawed instruction book.

Fuck me, if I would have known that when I rejected religious dogma and turned to atheism that I would have to accept these assholes, I may have stuck with the holy dude with the funny hat and his boy big J.

There were several dozen new atheist twitterers following that thread -- commenting, liking, retweeting. None of them understood the basic idea. Not everyone can be scientifically literate, that by itself isn't the problem (I always feel like a dick for calling people stupid), but they're unaware of their illiteracy and come in with this guns blazing true believer shit that has real, deadly consequences.

I could see someone challenging the method, saying it's not a lab and such, we don't know enough, etc., but no one did. Response to that one is that 1) burden of proof is on them to show a group is dangerous; 2) in any case, all the evidence has Western states as more violent; 3) and so much more violent that it's the equivalent of comparing Mt. Fuji to a small hill: you don't need to get them in a lab to figure out which is taller.

I think that is my problem as well. When it comes down to it, I don't want to be the dick that explains why someone has no fucking clue what they are talking about.

Azlan's criticisms of New Atheism are really very sound, which is probably why he has been torched for his seeming misrepresentations of his credentials. This is the level of discourse: if you can't argue the merits, then attack the individual.

Your point about the method is also interesting. If called into question I think it sort of invalidates the entire argument. I would add that 4) would be the fact that people's actions are one thing, but motivations are not binary. I would turn it around as ask "how would you organize the group?" Are we categorizing people by their stated reasons, their religious upbringing, their social/cultural heritage, political affiliation? I mean it comes down to definitions again. Even if it is not a lab, you can't even begin to have an argument if we can't agree on the definition of terrorism or define how to measure the variables.

Take the Oregon Wildlife Refuge takeover. Leaving aside the questions of disproportionate responses due to skin pigmentation, the original videos posted by the militia just prior to the occupation were centered around "upholding the Constitution" and a "fight against tyranny." Now they are realizing they have taken over an isolated and sprawling complex in the middle of winter. No one really cares and they are running out of food. Ironically, their videos have now become more urgent and center around this being a divine mission and that "the lord is with us."

"If called into question I think it sort of invalidates the entire argument."

Yeah, if there's not enough reliable information to show Islam isn't uniquely violent, there isn't enough to show it is. Burden of proof is on people who want to single out a group for bombing, profiling, etc. In a better world anyway.

Oregon is a perfect example. Rationalizations aren't reasons. As far as I can tell, you often need one but it just has to meet certain very broad criteria. A drinker, for example, will use "it's Friday," "I haven't had a drink in three days," "they're drinking on the show I'm watching (I deserve that too)." Those aren't the reasons. Even outside addiction cases, we still have incredibly limited access to our motivations. These brains are great for cognizing external object information, extremely limited at cognizing cognition itself. Reported motivations need to be looked at as objects of study, whereas new atheists and other apologists for imperialism and oppression reflexively (and every damn time) slip into normative 1st person POV mode (what would you do? what are they thinking? what's it like inside their heads?). Of course they're good guys in their own heads! It's a damn effective way to start with their conclusion.