The line between male and female is thick and unmistakeable, drawn clearly not by individual consciousnesses but by society-wide repetition. Lines cognized and acted out nonconsciously. They function without being made explicit. We learn language first by using it. If you're lucky/unlucky, you can learn different things by analyzing it later. But children understand grammar, specifically, how to use it, while lacking the ability to analyze and explain it. The gender distinction is learned by using it.

Undiluted (thankfully it's often diluted) the distinction is this: boys need to kill everything and replace it with themselves...or die. Dominance or emasculation, penis or no penis, boy or girl, life or death.

The boy, having become this message, needs to reconcile it with his asymmetrical relationships with women. It's humiliating for a hyper-gendered boy to be dominated by a woman. So he comes up with narrative fixes, outs, explanations where he's not actually being dominated. He believes these, tenuously. They're pretty obviously bullshit and reality is always knocking.

He hits puberty, "knows" he needs to fuck a woman in order to be a man. This is a huge change, and a huge challenge. To request this fucking is to risk rejection. Rejection is emasculation and death. A simple binary, the line around it in the worst cases impermeable. Santa Barbara killer Elliot Rodger went to great lengths to put himself in a position to be accepted without risking final rejection. He never, apparently, made any kind of advance on a woman. Instead, he spent great amounts of time and money on his own appearance, went to places he expected to find good-looking (blonde) women and hoped they noticed him. He never "put himself out there." He left himself an out. Maybe next time. No one actually said no. Or, as Jim Carrey's Lloyd Christmas said in Dumb and Dumber to his love interest's assessment of his odds of getting with her as one in a million..."so you're saying there's a chance."

This is really amazing. A single woman saying "I'm not interested" or "go away, creep" or laughing was far and away the most powerful force in his life. No, the possibility of that.

The MGTOW (Men Going Their Own Way) phenomenon is an obvious out. "Hey, women-we-want-to-fuck: we don't want you anyway. You are not rejecting us." It's understandable, I mean, given the above. They're trying to go pre-puberty. Back to a time when they could less implausibly claim to be not-dominated (where non-hyper-dominance means being dominated -- again, it's a pretty strict binary). Before the need-to-fuck-to-be-a-man challenge. They'd been talking about how they could easily dive off the 10 meter platform but now they're up there. Do it! *Tries to find a way out, can't, shoots a bunch of people instead.* That's Elliot Rodger.

Rapists take away the chance for rejection. This is the point. Rape is the most extreme form of masculinity. (I worry a broken rapist somewhere is thinking "yay I make sense! yay, masculinity!" but it should be clear this is a condemnation of masculinity.) OK, outside the parentheses, still worried this could be taken the wrong way, given certain positive associations with masculinity, but really just want to end this post. OK.
Posted by Devin Lenda No comments:

"Gun control" is a term that refers to non-state guns only. Everyone just gets what you mean when you say it. Somewhat amazingly, no one feels the need to indicate that they're not referring to state guns, which are the biggest and deadliest guns. F-16 guns, cops with guns and tasers, etc., are not considered guns, just as Hiroshima and Nagasaki are not considered violence. What the ingroup does is the very definition of good. And just about everyone's in it for the state, completely unaware they're referring to guns as not-guns.
Posted by Devin Lenda 2 comments: 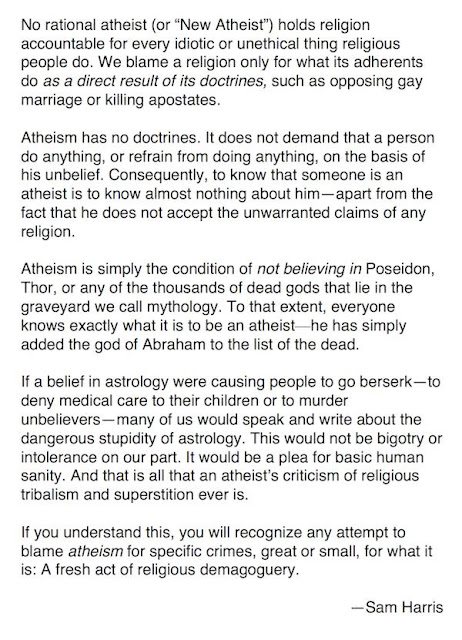 To understand what "God (or Thor) exists" and "God (or Thor) doesn't exist" mean, you need a brain and an act of cognition. Each takes place in a brain and involves natural systems embedded in natural systems (that, conveniently for Harris, are mostly opaque at this point in human history). To take a position on the existence of God is an event, not the absence of an event or a non-event.

Harris rejects the assertion "God exists." He doesn't admit as much, but he does reject it.

What atheists do lack is the cognitive act of agreeing to the proposition that God exists. If you think that's what atheism is, maybe you're as misguided as Sam Harris. Again, atheists reject God belief. They answer negatively to the "does God exist?" question. They've dedicated considerable brain resources to the question of God. Absence of an affirmative is part of a complex process, and, unlike monkeys' thoughts on God, it exists. And unlike beliefs about Thor, it matters.

So why do New Atheists denaturalize and deobjectify atheism? I'd suggest it's so that it can't be studied and measured against theism. This is, ironically, an intellectual move theists are known for -- remove God from the material world and declare him off limits to scientific investigation.

Now it's really quite simple to naturalize non-God-belief (NGB). I just did, in fact. You simply situate it in the brain, identify it as the brain event it is. It's also very easy to make apples to apples comparisons between atheists and theists. This is as good a time as any to admit my bias -- I believe that atheists exist. The only reason the ontological status of atheists' belief that God doesn't exist is relevant is that so many atheists insist on using it to immunize themselves from scrutiny. Apples to apples, theists to atheists.

Theism versus atheism, on the other hand, is a philosophical question. It deals with unmeasurable abstractions. If it turns out that no harm comes from theism, no 21st century intellectual should have a problem with it. There'd be no good argument for antitheism. But Harris claims that harm comes from theism. Theism versus atheism, the philosophical debate about God's existence, has nothing to say about harm. To answer that question, you study atheists versus theists.

Harris implies that God-belief (GB) causes bad things whereas NGB doesn't cause anything. If he wanted a decent hypothesis, doing away with the absurd "absence of belief" angle and comparing apples to apples, he could suggest that GB causes more of these or those specific bad things than NGB, then compare, for example, atheist and theist levels of violence, and speculate about what causes the difference in violence levels, whether it's really GB or something else and if GB, what about GB it might be. In order to compare violence levels, you'd need to factor out rationalizations for violence (because they near-universally accompany it), which means, contrary to Harris's line of argumentation, that F-16s, napalm, white phosphorous, nuclear weapons, etc. all get filed under "violence" when used, regardless of who uses them, at which point Harris would be (further) exposed as the western secular violence apologist he is.
Posted by Devin Lenda No comments:

What is New Atheism?

1. ...are proud of non-God belief. NGB is an important part of their identity.

2. ...consider God-belief a significant cause of violence (and other ills). Think a world without God-belief would be more peaceful. Think this is obvious.

3. ...consider atheism categorically incapable of causing violence because no one ever says "I kill you in the name of the no-God." By implication, metacognitive reports in regards to one's own motivations are seen as both important and reliable. If you say "I did the bad thing because FDR told me to," that's the reason. To phrase it less generously, self-ascribed motivations are taken at face value and assumed to be causal. ("I killed her because I loved her"-- "cause of death: love")

4. ...think or assume western state violence (WSV) is either generally well-intended and therefore not actually violence so much as, say democracy and freedom (good violence = 0 violence) or, far less often, that it is actual violence but simply not religious because it's rarely (NAs seem to assume never) accompanied by God-words. So WSV is either non-religious nonviolence or non-religious violence. Either way, WSV is entirely distinct from religious violence.

5. While atheism is responsible for 0 violence, religions, whose adherents sometimes proclaim their God belief as the reason for their violence (and when they don't, c'mon you know they're thinking about it), are not all equal. Rather, violence varies by religion, depending on geopolitics how, um, bad they seem to be if you use your western ideals and kinda think about it. So Christianity and Judaism are bad but Islam is considered, in the words of prominent New Atheist Sam Harris "the motherlode of bad ideas." No evidence has been given by New Atheists. You just kinda know.

A: Yes, but...
Q: So atheists can be violent, but atheism never is?
A: That's right. Atheism is the good and the true and people who follow its teachings can call themselves Brights, or, to paraphrase, The Finders of the Way.
Q: I want to be good and true. Can I be a New Atheist?
A: Probably.
Posted by Devin Lenda 3 comments: