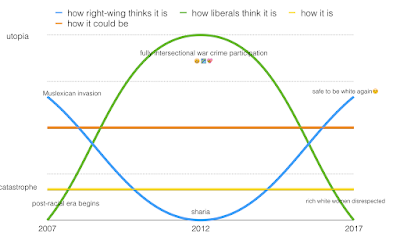 It's a pretty decent analog to the ratchet effect.

I noticed some liberal friends of mine freaking out over Trump's cabinet selections. I reminded them that while they are heavily conservative and uniquely corporate, the great and wonderful Obama appointed 3 republicans to his first cabinet.

"So what. That just shows how a truly bi-partisan and mature statesman functions," they say. Or it shows that the democrats belong to the same corporate party that the republicans do. It shows that we inevitably move right regardless of the outcome of the election because that's what the elites want us to do.

I mean, say what you want about Trump's lineup, but please hold your fucking horses when attempting to point out any difference between Obama's team as to who is really in control. Corporate interests are always served so the worst you can say about Trump is that he simply cut out the middle-man by actually hiring suits.