no, no, i hypothetically love it when sam harris criticizes bad ideas 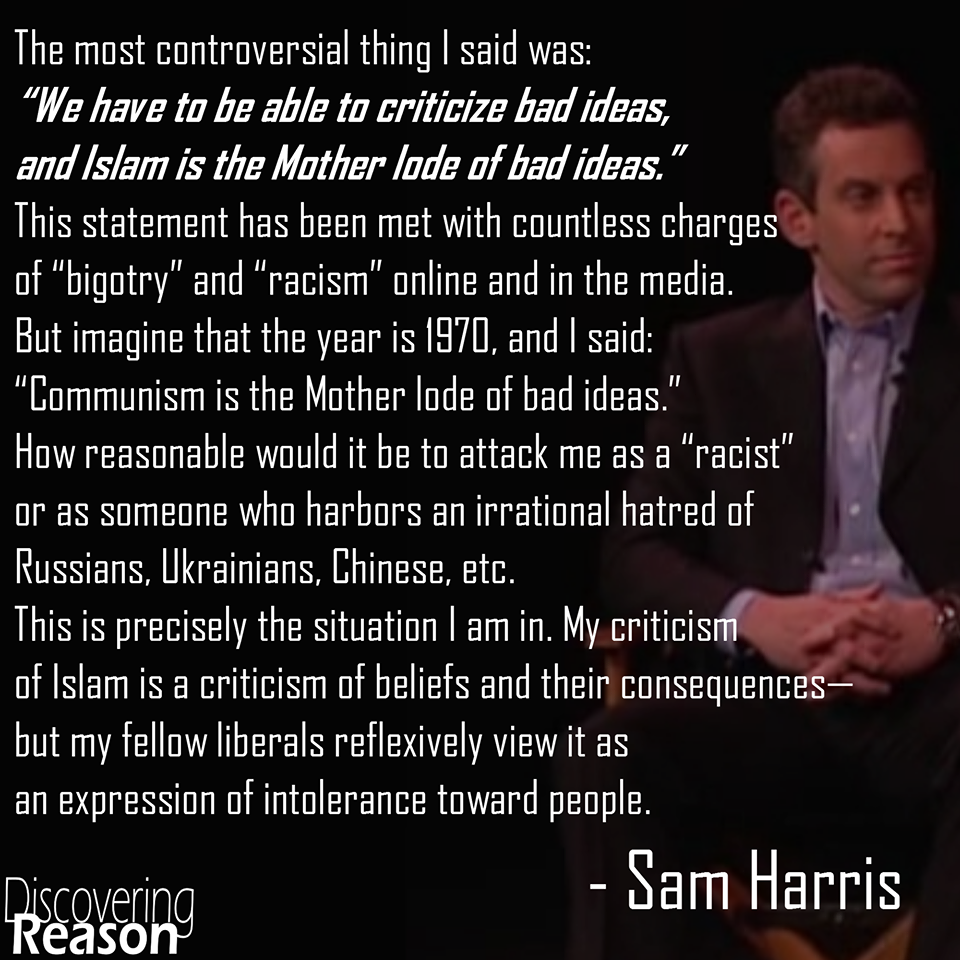 "We have to be able to criticize bad ideas..." Interesting point, Sam, but it seems like an issue that needs to be settled between you and that non-existent group of people who openly oppose criticizing bad ideas, you strawman-dependent asshat.

"Islam is the motherlode of bad ideas." OK, so that's your claim. Your thesis, if you will. A bit imprecise, but whatever. Maybe you can back it up? This link suggests it's an absolutely baseless claim against a large non-monolithic group of people that carries terrible real-world consequences for its targets. If true, that would mean that anyone who says you're being irrational or wrong is correct and that anyone who says you're being a bigot is also correct.

For example, if you'd said "people with purple hair are the motherlode of Ebola transmitters (and although this conclusion will lead to negative consequences for them, those consequences will be worth it...for somebody)," you'd be an irrational bigot if you didn't come up with some compelling evidence. And if your claims about purple-haired people had been debunked again and again, and if it were shown that there's not even a goddamn correlation between purple haired-ness and Ebola, you'd be some kind of next-level irrational bigot, I guess. Or, it would just be more obvious.

As for what a rational case against Muslims (or purple-haired people) might look like, I covered that here. In short, you'd need to make at least one unambiguous, falsifiable claim set up such that we might apply the same yardstick consistently to all members of the set in question; make a strong case, or at least give some reason to believe that there's a correlation between Islam and violence...next, well, nevermind. If you can't do the first two, and you can't, just stop.

"...but my fellow liberals reflexively view it as an expression of intolerance toward people ." Stop talking about how people don't understand your jello and make the case. See above.

(This post feels like it's missing something. Well, I haven't actually debunked any specific claims. Because he didn't make any here. As for what he's said elsewhere, check the jello link.)
Posted by Devin Lenda