X is bad. Y is worse. If you think that’s an endorsement of X, go away and don’t come back until you’ve learned how to think logically.

Date rape is bad. Stranger rape at knifepoint is worse. If you think that’s an endorsement of date rape, go away and learn how to think.

I see a lot of people accepting the "logic" part and focusing on the "he's such a dickhead" part. But without the word "necessarily" in each of the above tweets before "endorsement," these aren't even reasonable statements.

There are two separate comparisons in the above tweets and the one that's supposed to save him is both prior to the one he's making and unexplicated. The first, mostly hidden comparison which should, if he were being "logical," frame the second is between rape and not-rape where not being raped is considered better than being raped. So if someone offers to rape you, you should say "no." The second comparison is between types of rape, with one better, the other worse. So if you have to be raped and the only two choices are "date rape" and "rape by a stranger at knifepoint," you should choose "date rape." Uh-huh. (Let me put aside, for the sake of moving on, the fact that the ability to compare evolved in the context (information ecology) of choices between A and B that improved or hurt survival chances and that science takes advantage of a weird, exapted ability to suspend valuation and tack it back on post hoc. To be clear, he's not doing science here. To be clearer, the relevant questions, scientific or otherwise, are how to make rape not happen and how to deal with it when it does happen. As we'll see, Dawkins is not concerned with these issues.) 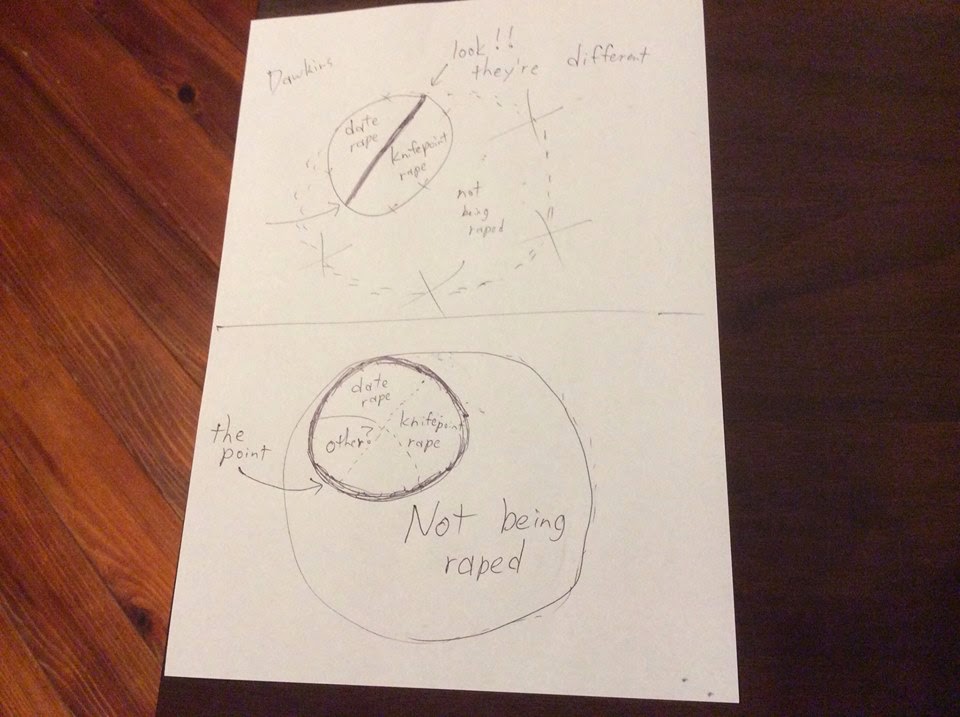 Since the comparison has a better and a worse, and since by convention and the rules of cognition, better is good and worse is bad, absent the prior distinction clarifying that both are bad, date rape would appear to be good. Though "both are bad" (compared to not-rape) is implied, it's not the comparison he's making. At best, it's the implied background to the comparison he wants to make, not the foundation. That comparison being that date rape is better than "stranger rape at knifepoint." Only the prior distinction, that "rape is bad" (thanks dick!) can save him here, as that's the main point for anyone who cares about preventing rape. And what has he said about that? Well, he's not known for caring about that. Find me a quote, please. He's known more for comments like these, comparing one woman's experience of patriarchy to another's. Shouting down his own supposedly foundational comparison (where he'd claim that where Y is bad, X, though not as bad, is, yes, bad):


Stop whining, will you. Yes, yes, I know you had your genitals mutilated with a razor blade, and … yawn … don’t tell me yet again, I know you aren’t allowed to drive a car, and you can’t leave the house without a male relative, and your husband is allowed to beat you, and you’ll be stoned to death if you commit adultery. But stop whining, will you. Think of the suffering your poor American sisters have to put up with.
Only this week I heard of one, she calls herself Skep”chick”, and do you know what happened to her? A man in a hotel elevator invited her back to his room for coffee. I am not exaggerating. He really did. He invited her back to his room for coffee. Of course she said no, and of course he didn’t lay a finger on her, but even so…

The thing that's worse, by comparison, isn't actually bad. See where the background went? It wasn't the foundation after all, it was his cover for zooming in on a comparison that has the opposite effect of saying X is bad. His entire point is that "X is not-so-bad" (i.e., is relatively good). He's also shown that he doesn't actually know where the line is. He points at it from a distance with implications, but exposes himself with comments like these.

So let me put it this way:

When the comparison is between different types of oppression, where the distinction between oppression and non-oppression is not accepted as prior, as the frame, as the point, you are in fact saying that one type of oppression is better than the other.

I'm not sure I consider date rape and at knife point rape to be all that different to begin with.

I feel the problem is how he's making a distinction between them, rather than in making distinctions perse. Droping a medium sized rock on your foot vs getting it bit off by a shark - well, the former is better than the latter.

Perhaps if he'd gone with being raped and stabbed, that'd be worse. But date rape and rape at knife point - well, there's a knife involved with both, really - the intimidation. The actual metal doesn't matter in itself, it's just a physical representation of the intimidation involved.